This metric set is designed to allow annual land cover and vegetation structure mapping models extrapolation in space and time. While this annual metric set is generated primarily using the observations collected during the corresponding year, the data from the three previous years are used to fill gaps in the observation time-series that may affect the consistency of phenological metrics. To generate an annual set of phenological metrics we recommend using 16-day Landsat ARD from four years (the current and three preceding years). The metric generation may be applied to an incomplete set of 16-day intervals (i.e., only intervals for a corresponding year). In this case, the gap-filling algorithm will shut off automatically. Before processing the phenological metrics, use Landsat ARD Download to download the 16-day data time series.

First, we compile a time-series of annual observations with the lowest atmospheric contamination (Figure A). The per-pixel criterion for 16-day data selection is defined automatically based on the distribution of quality flags within the four years of data. If clear-sky land or water observations are present in the time-series data, only those are used for subsequent analysis. If no such observations are found, the code successively changes the quality threshold for data inclusion, first allowing observations with proximity to clouds and shadows, then allowing all available observations.

To create an annual gap-filled observation time-series for metric extraction, the code analyzes the duration of the gaps between existing 16-day observations of the current year (Year i). If a gap exceeded two months (four 16-day intervals), it will search for the clear-sky observations in the previous years within the gap date range, starting with Year i-1 and until the Year i-3. When clear-sky observations are found, they are added to the gap-filled time-series data, and the gap analysis is performed again until all gaps longer than two months are filled or no available data are found within the four-year interval. 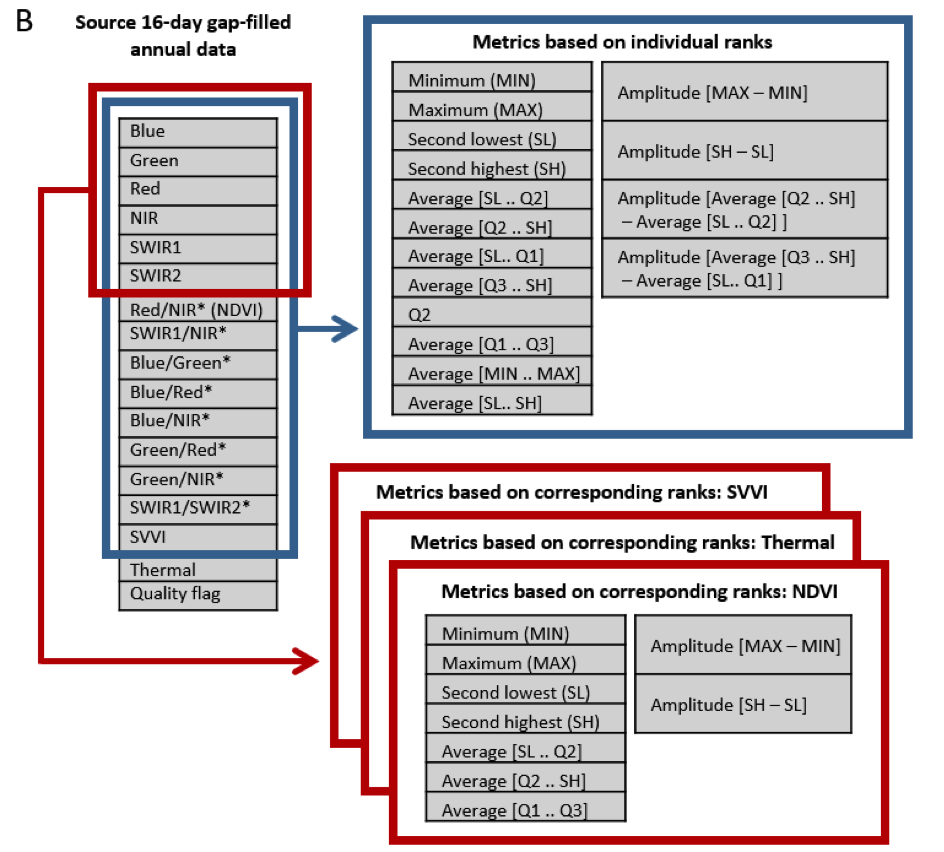 The metrics for each tile is stored in a separate folder as a single-band UInt16 bit GeoTIFF files. The generic naming convention is the following:

B – spectral band or index

2018_blue_max_RN.tif - The metric represents the value of the normalized surface reflectance of the Landsat blue band for the 16-day interval that has the highest red/NIR normalized ration (also known as NDVI) value during the year 2018.

The table Metrics_pheno_A.xlsx has details on the bands, indices, and computed statistics.

In addition to spectral metrics, the metric generation software produces a set of technical layers including the number of cloud-free 16-day composites, gap-filling algorithm outputs, data quality, and water presence.

The following software should be installed to generate metrics:

The command parameters are:

Input folder: the folder with 16-day composite data. It should contain tile data in subfolders.

Output folder: will be created by the code, tile data will be recorded into subfolders.

Threads: the number of parallel processes. The parameter should be increased only if: