Shifting Cultivation at a Crossroads: Drivers and Outcomes of Recent Land-use Changes in Lao PDR 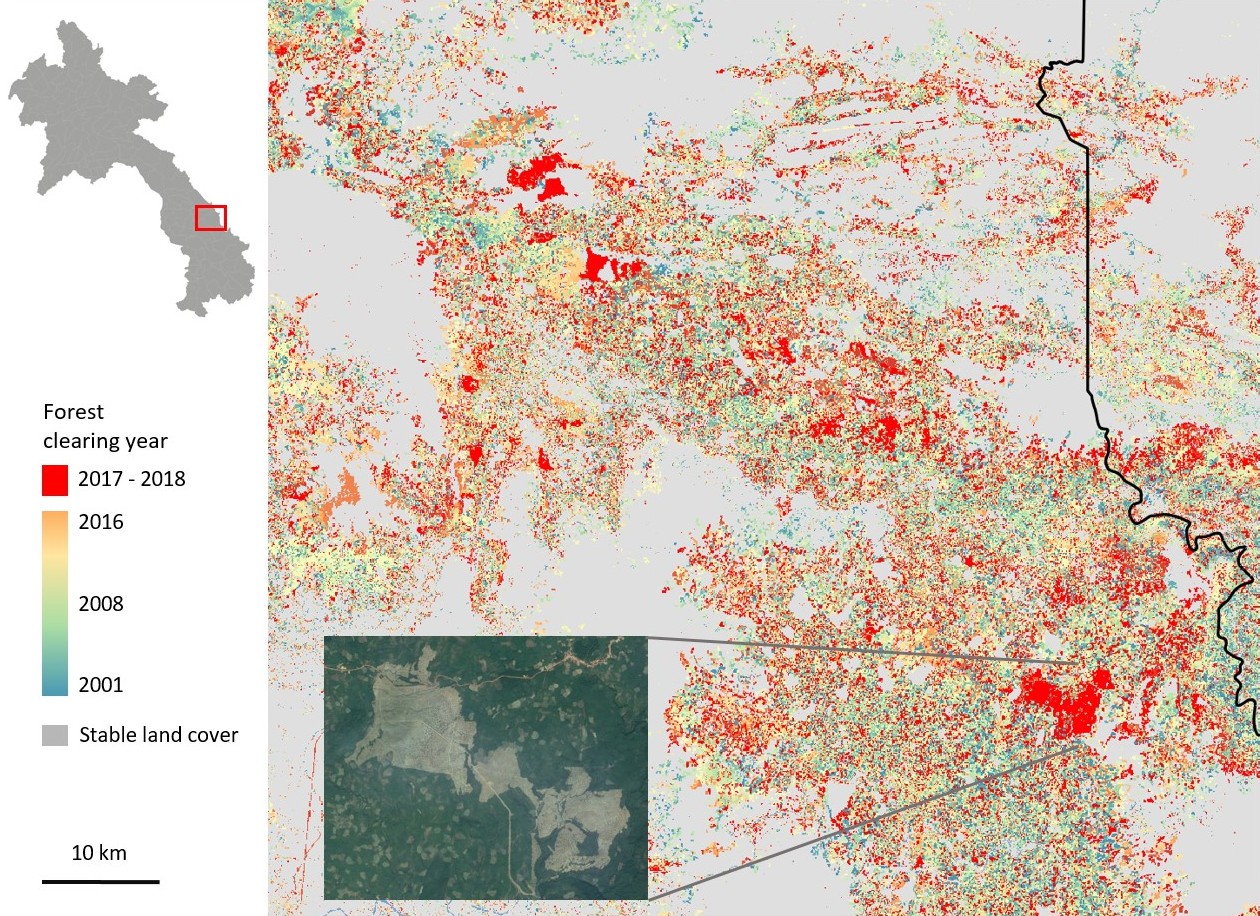 In low-income countries of Southeast Asia, shifting cultivation is part of a traditional agroforestry system practiced for centuries and remains the dominant agriculture technique in areas characterized by rough terrain, low soil productivity, and limited market access. Shifting cultivation systems are commonly associated with rural poverty and forest degradation. Due to its low productivity and incompatibility with most cash crops, shifting cultivation may lock farmers into ‘land use’ poverty traps. On the other hand, traditional shifting cultivation practices can enhance livelihood resilience and landscape mosaics from fallows provide a number of ecosystem services both for local and regional populations, including climate and water regulation.

The Lao People’s Democratic Republic (hereafter Laos) presents a unique opportunity to examine transitions in smallholder shifting cultivation extent and intensity, investigate the socio-economic drivers reshaping rural agricultural practices, and quantify their economic outcomes for rural households. Laos is among the world’s top-ten countries with the highest (93%) proportional national forest cover and dominance (67%) of the rural population. Agriculture plays a central role in the national economy and a large majority of the rural population are subsistence farmers whose income and food supply depend on small-scale agriculture, animal grazing, and collection of food and fuelwood from natural forests. In the forested upland regions of Laos, shifting cultivation is still the dominant land-use practice due to the limited market access, low population density, and surplus of forest lands. Up to 1.9 million people directly depend on food and income from shifting cultivation.

While shifting cultivation has been practiced in Laos sustainably for thousands of years, its future appears to be at a crossroads. Rapid population and economic growth, government market liberalization policies, and increasing demand for raw materials and agriculture production from neighboring countries (China, Vietnam, and Thailand) have all led to intensified land use pressures. The commercialization of the agriculture sector has resulted in the implementation of modern agriculture techniques and crop diversification. The Laos government program for forest area increase through the eradication of shifting cultivation and resettlement of remote upland villages has resulted in an observable trend in the reduction of shifting cultivation in many regions of the country. Shifting cultivation remains, however, the main agriculture technique in the poorest parts of the country, especially within upland areas of Northern Laos and along the border with Vietnam, and in many places disproportionally populated by ethnic minorities. Eradication of shifting cultivation in upland areas may result in negative consequences to the food security and nutritional quality for local communities, and in the loss of ecosystem services in the case of land use conversion into industrial production. Despite government efforts to increase forest cover through land sparing polices that restrict shifting cultivation, it appears that such efforts have had the opposite effect and actually increased deforestation. Observed negative outcomes of shifting cultivation conversion shows the importance of the detailed analysis of economic and policy drivers and outcomes of such changes to ecosystem services and rural population well-being.

The overarching goal of the project is to quantify trends in the evolution of smallholder shifting cultivation systems, to associate specific transition pathways with corresponding trajectories of inequality and human well-being, and to understand the socio-environmental outcomes of land sparing policies. To reach this goal, the current project has three main objectives.

Objective 1 is to map shifting cultivation landscapes and tree plantation establishment annually, and to quantify changes in shifting cultivation extent and rotation intensity over the last three decades, from 1988 to 2019. Wall-to-wall mapping and sample-based analyses will be used to quantify land-use trajectories of smallholder agriculture and industrial plantation establishment at the national scale. We will use the annual forest, plantation and permanent agriculture extent time-series to quantify changes in ecosystem services provision, such as carbon sequestration, species habitat preservation, water runoff regulation, and soil erosion prevention.

Objective 2 is to examine how changes in shifting cultivation extent and intensity correspond to changes in multidimensional inequality and human well-being. This national-level analysis will account for regional variation in economic and environmental conditions, allowing us to identify the main driving forces behind observable patterns and dynamics. We will also examine how specific LCLUC trajectories limit (or enhance) the future prospects of rural populations in terms of human well-being and ecosystem health. At the national scale, we will combine census and national survey data with satellite-derived metrics to explain province- and district-level heterogeneity of the observed land use changes and to select socio-economic variables that are indicative of these changes. We will also conduct this analysis for each identified shifting cultivation transition type. As a part of our second objective, we will quantify social and environmental outcomes of shifting cultivation extent and intensity change, and build a conceptual model for predicting these outcomes.

Objective 3 is to document the consequences of transformation in shifting cultivation landscapes promoted by land sparing policies (e.g., reforestation or tree plantation establishment) at the community level. We will examine how rural households are responding to the varying constraints on practicing shifting cultivation and how these are likely to impact future land use patterns. The detailed community analysis will be performed within a subset of the sub-national regions selected using stratified random sampling. Stratification will be based on the observed changes in shifting cultivation intensity and industrial plantation establishment. For selected regions, we will conduct (a) population and land allocation change analysis using information collected from government agencies; and (b) a household survey and village focus groups. The environmental outcomes of shifting cultivation change will be quantified using national remotely-sensed vegetation structure data and field data available from the national partners. Used together, these data will allow us to understand the mechanisms behind changes in shifting cultivation and to relate the outcomes of such changes for inequality and multidimensional well-being at the local level.